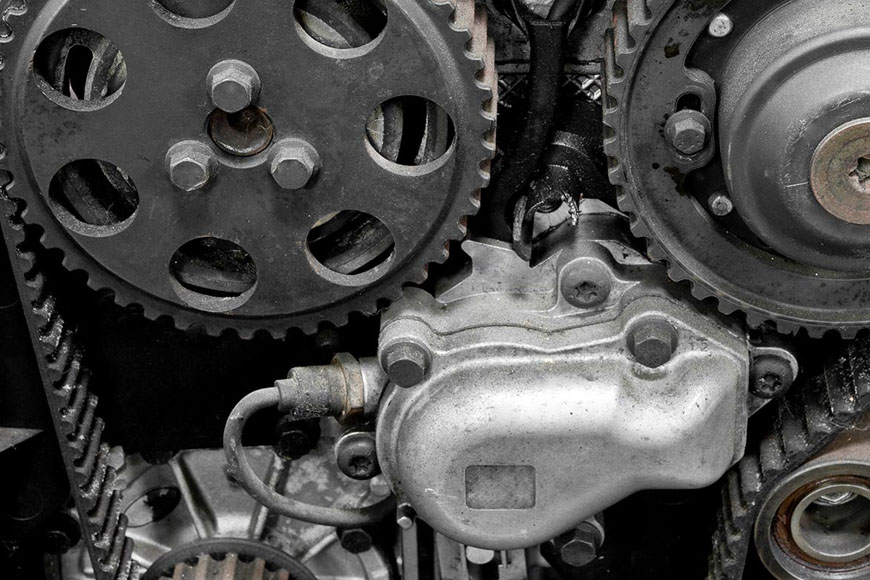 WHAT IS A TIMING BELT?
Timing belts are made up of a composite rubber construction with nylon reinforced cords to provide a longer belt life. It is usually located behind a protective plastic cover on the front of the engine.
The timing belt controls the synchronisation of the camshaft/s and crankshaft inside the engine, allowing the engine valves to open and close at the correct time while the engine is running.
The timing belt tensioner applies the correct pressure to the belt so it does not slip, and the idler pulleys keep the belt in correct alignment and allow for changes in direction around other components, such as the water pump, which may also be driven by the timing belt.

TIPS TO REMEMBER:
– On some engines, the water pump runs off the timing belt – therefore, it is a good idea to have this inspected and replaced when the timing belt is off the engine, having them replaced at the same time can save on labour costs further down the track, and will ensure everything is in good working order
– Some vehicles are equipped with a timing chain, these vehicles do not require any form of replacement unless an issue is present

WHY IS REPLACING THE TIMING BELT IMPORTANT?
The timing belt controls the synchronisation between the crankshaft and camshaft/s.
If it is not replaced at the manufacturer’s specified recommendations, it can slip, stretch or break – causing major engine damage, and may leave you stranded with a massive repair bill

Even if you are not travelling the recommended distance, the timing belt, tensioner and idlers still need to be changed when recommended by the manufacturer, as the rubber and other components can become brittle and cause premature failure.

If you’ve read this far, you obviously care about your car. A lot. So next time you need a service, repair or inspection, visit ES AUTOMOTIVE.

When to change a timing belt
Some old school mechanics may tell you to replace the timing belt every 100,000 km. While this may have been the case 20 years ago, nowadays you need to do your homework as every make, model and engine has different requirements.

In modern engines manufacturers recommend replacing the timing belt from between every 40,000 – 150,000 kilometres, depending on the engine. If you only use your car now and again and don’t do many kilometres, you will still need to have the belt/chain replaced based on the age of the vehicle. Timing belts/chains can deteriorate and/or stretch over time.

Why does it take so long to fix?
You won’t want to hang around and wait while they do this service. All vehicle types are different, but allow at least 3 to 8 hours for this service, all going well. To fix the timing belt the mechanic has to:
– strip the front of the engine
– check seals, pulleys, and water pump
– change the timing belt, plus kit if needed
– set the camshaft/valve timing
– and then test it all
In some cases the mechanic will also need to remove the front section of the vehicle, and on some front-wheel drive vehicles lower the engine to be able to access it, which is why it can take a long time.

Possible extra costs
While the mechanic is pulling the front of your engine apart they will probably recommend you replace your water pump and coolant at the same. Given the age/mileage of the vehicle, the possibility of the water pump failing not long afterwards is higher, and with this usually being a highly labour-intensive job, doing both while you have the engine pulled down, replacing the belt and the pump it’s the smart thing to do. Pretty much the only additional cost you’re incurring is the price of the water pump, rather than paying for the labour twice.
The mechanic may also need to replace hydraulic tensions as part of a kit, instead of just the belt. It is best to lock in and fix a timing belt service prior to it getting done as this service has the ability to take longer than expected. So put your mind at ease by fixing the price before they commence.